Who Was Angela Zendalic is set in Oxford, in the locality of Jericho and the world of University academia, between 1953 and the present.
In 1954, after a brief love affair with an African postgraduate, Peggy Edwards, a war widow and librarian, gives birth to Angela, and due to the cruel discrimination of society, and her own deep shame, must give her up for adoption.
Angela is adopted by a loving and well-meaning white couple, and as she grows up must come to terms with racial prejudice, the confusion surrounding her circumstances, and of falling in love with a man fifteen years her senior.
Sarah, Angela’s own daughter, is a liberated single parent who, on the death of her father, discovers her mother was a stranger called Angela Zendalic. Thus, she must confront her shock in order to search for her.

Mary Cavanagh is a courageous writer who takes on difficult but important subjects. In Who Was Angela Zendalic? the subject is changing attitudes towards race, in particular, mixed race children, in the 1950s and 1960s.
A superb Book Group choice

What strong characters, what a surefooted progress through complicated and fraught situations and events, what clear fearlessness in depicting strong emotion, what a strong narrative impulse which held me concentrated throughout. A really, really good story. Congratulations!

… those concerned with racism should shower it with accolades

I thoroughly enjoyed this book, both for the accurate descriptions of Oxford and for the atmospheric recreation of the recent past. I would definitely recommend it to anyone who likes a ‘good read’.

My 50th book this year and it was brilliant. I couldn’t get out of bed till I finished it. Who was Angela Zendalic? is a masterpiece.

. . .The story of Angela has been beautifully written and as usual with this author, explores human nature, motivations, and the intricacies of relationships. There are some great characters and the book is set over three generations really giving the reader a feel for different eras.

A sensitive and moving portrayal of racism, and the personal and sexual restraints, that were so much part of life in the post war years. A story told with skill, humour and a mirror to profoundly changing times. A thumping good read: three interwoven and beautifully written love stories that evoke passion, secrets, moral dilemmas, and personal tragedy 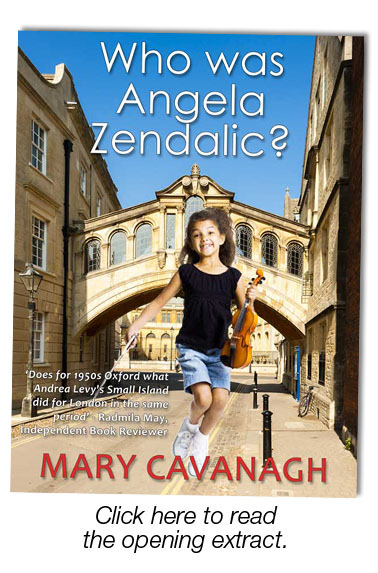